Among the many changes to the actual rules for 2019, there will also be significant changes in much of the terminology used to describe them. A lot of the familiar words and phrases that we’ve used for so many years have either been modified, replaced, or outright removed. Let’s take a look.

Abnormal Course Condition. This one will replace “Abnormal Ground Condition” and basically describes anything we’d find on the course that’s out of the ordinary like animal damage, ground under repair, immovable obstructions, and temporary accumulations of water.

On the subject of water, there’s a couple of changes there too. Temporary Water is on-tap (see what I did there) to replace “Casual Water”, and the word “Hazard” has been removed from the book entirely. The new phrase Penalty Area will be more of a catch-all used to describe any zones marked by the Committee that will cost you a stroke to get out of, wet or not. Things like hard to access areas, or places that may be really tough for the average golfer to get out of quickly. I will be buying stock in a spray paint company…

“Through The Green” is also out, replaced by General Area. It still covers the same basic stuff as before, i.e. anywhere on the course that’s not the Teeing Area (ah yes, no more “Teeing Ground”) or Putting Green of the hole you’re playing, and any bunkers or Penalty Areas.

“Nearest Point of Relief” has been expanded to Nearest Point of Complete Relief, which is a relief because I find that rulies are always using the word “complete” anyway when explaining to players how to actually take relief. I’m so relieved.

Remember when some animals were animals, and some weren’t animals? Well, now all animals fall under the term Animal. Again, so relieved. Now, any creature in the animal kingdom (other than we Humans) is classified by the definition. No more discriminating against worms and insects. No more special treatment for dogs (well, except for my dog – sit, good girl). Égalité! And with Animal comes the truncated term Animal Hole. This gets rid of that pesky “burrowing” word, so that we can cover other things that animals also do, like leaving footprints, or pushing up the ground from underneath, like that mischievous gopher in Caddyshack.

Other vaguely familiar terms you will see in the new rules are, Natural Forces, No Play Zone, and Outside Influence. Similar in meaning to the ones they’re replacing, but polished and refined to suit the language of the day. In fact, all of the language in the new code has been made current. Easier to understand, easier to apply. Not to say you won’t see some old favourites in there too, like Known or Virtually Certain and Loose Impediments, but they’ve all been given a new coat of paint and buffed to a waxy shine. I invite you to peruse the Definitions section of the new rules. And, even though they’re now at the back of the book, it’s always a great place to start. Sunglasses optional.

On a more serious note, earlier I referenced the French word for “equality”. It reminds me of another word, neutrality. More specifically, gender neutrality. Even though those of us in the officiating community have always known that the rules apply to all players, and even though there’s also a preamble in the current rules stating that the masculine references in the book are to be treated as applying to both male and female genders, ever since the Rules of Golf were first put to paper over 250 years ago, the rules have inferred that our game is being played exclusively by men. The new rules are completely and purposely non-specific in this area, and it’s about time. If golf is supposed to be a game for everyone, then its rules should walk-the-walk too. This change is not only way overdue, but it’s also as important as any of the other changes made for next year, and beyond.

I’d also like to take a moment to acknowledge a fellow official in Ottawa, Blake Wimperis, for taking the time to parse through the new and old terminologies. It made this column a lot easier to write. Cheers!

/ Rich McLean
Rich McLean is Golf Canada Level 4 Referee from Kanata, Ontario. He calls himself “a lifelong player, and fan of this great game.” You can find him on Twitter, @LobWedge. “Golf has given me so much joy, and this is my small way of giving back.  Have fun. Play smart. Play well.” 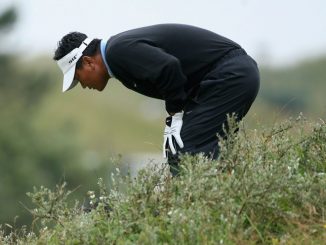 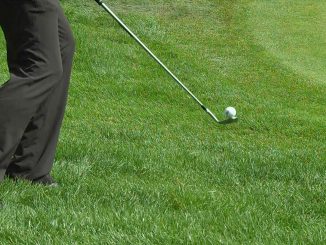 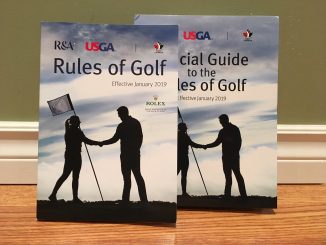