Not only was Martin Kaymer’s victory at The Players a big one for the German golfer, it was also an affirmation for his footwear sponsor, adidas golf. The 2010 PGA Championship winner happened to wearing adidas footwear with gripmore technology – set to hit retail on June 1, 2014.

The company recently revealed details of two new footwear models that will feature the cleat design intended to combine the benefits of spiked and spikeless footwear in one neat package.

The two new shoes will be the adicross gripmore and the pure 360 gripmore sport.

adidas calls this directly injected microspikes the most green-friendly models they have ever designed. At the same time they claim exceptional connection with the ground for traction and stability.

The adircoss gripmore uses 43 grip more cleats and has 243 points of contact. This was the shoe Justin Rose debuted in March at the WGC-Chadillac Championship.

“I’m always looking for footwear that provides traction without compromising comfort, style or on-course performance,” Rose commented at the time. “With gripmore, I have the versatility of a spikeless shoe combined with the performance of a cleated shoe. It’s the best of both styles.”

Golfers seeking a more athletic look with likely gravitate to the pure 360 gripmore sport which features fewer cleats and contact points (23 and 161 respectively). 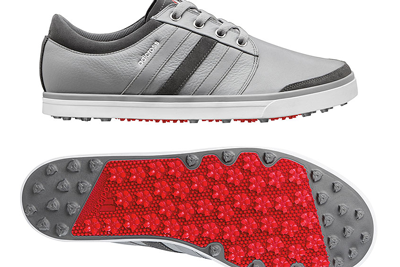