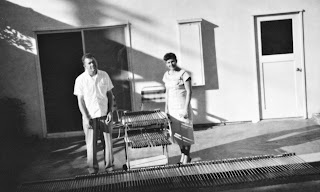 It was a milestone moment in golf and in particular, golf club design. Fifty years ago today, on January 15th, 1959, the first PING putter was shipped from the Redwood City, California garage of Karsten and Louise Solheim (Photo left, courtesy of PING).

Nobody knew how the putter would be received but one thing was very clear – it was far different looking than any others that had preceded it into the marketplace. Sporting the heel-toe weighting that has become synonymous with golf club design, the 1-A not only had a unique look but a unique sound as well. It rang like a bell and as a result, whether it was in your line of sight or not, it immediately grabbed your attention.

Karsten Solheim passed away in 2000 but his contributions to the game were well recognized. After his passing he was enshrined in the World Golf Hall of Fame. After his first putter, the engineer would go on to bring new standards into the club building business. Investment casting, heat treating, custom fitting, and even the use of robots for testing were all initiatives he embraced. With his wife Louise (who turned 90 last year), they were strong supporters of the LPGA and one of the first companies to embrace custom fit clubs for women.

Five decades after the first 1-A left the garage the company continues to innovate, now under the watchful eye of Karsten’s descendants. That includes 34 year old John K. (Karsten) Solheim who leads the product development team. On summer breaks he used to follow his grandfather around the company’s Phoenix factory, “Working with Karsten was very enjoyable and educational. Everyday was an adventure. He had an amazing passion for what he did and everyone respected his thoughts and ideas on every topic.”

PING will celebrate for their founding all year long starting with a kick-off at the 2009 PGA Merchandise Show. There they will have a birthday celebration for industry associates and unveil a line of 50th anniversary products. This will include a special limited edition PING 1-A putter. They have done similar special editions for past anniversaries.

John A. Solheim, PING Chairman and CEO and youngest son of Karsten and Louise says that the milestone is an important one for the family. “We’re humbled by this accomplishment. In today’s market-place, it’s refreshing to see that a family-owned business like ours can continue to be a major contributor and leader in the industry. I know my dad would be extremely proud of this day knowing we’ve grown PING to what it is today while building on the foundation and philosophies he and my mother established 50 years ago.” 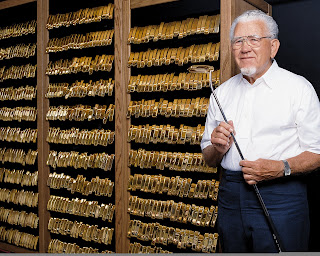 Karsten Solheim (Photo courtesy PING) pictured in his famous gold putter vault. With each tour win two gold putters were created, one given to the winning tour player and one kept at the factory. It grew to be a pretty impressive collection.