Earlier this year, McConnell Golf — owner of a dozen 18-hole, private golf courses, one semi-private and one nine-hole course throughout the Carolinas and Tennessee — announced to the Raleigh Country Club membership that golf course architect Kyle Franz would oversee the restoration.

Franz played a key role creating several of the most innovative and acclaimed courses built in the last decades, while also helping enact the restoration plans of several classic courses. That list includes a pair of North Carolina-based Ross designs: the highly profiled restoration of Pinehurst No. 2, where Franz assisted Bill Coore & Ben Crenshaw prior to the 2014 U.S Opens, as well as his 2013 restoration work at Mid Pines Inn & Golf Club, which garnered “Best U.S Resort Renovation of the Year.”

Established in 1948, Raleigh Country Club is a private club located just outside of downtown Raleigh, at 400 Donald Ross Drive. Non-members/visitors who live at least 160km from the club location can get access through a unique McDonnell Golf Trail program.

In 2003, to help preserve the club’s history, John McConnell bought RCC and McConnell Golf was born.

RCC closed the golf course at the beginning of February and the plan is to reopen in early October. McConnell Golf estimates the cost of the project cost to be approximately $5 million.

In a letter to the Raleigh Country Club membership, John McConnell said the focus of the project is to produce an improved course for all levels of players. “Many different ideas were discussed and reviewed with the architect, contractors and our staff to finally get to a design that was in our budget, would be a major improvement for the course and member play, and would benefit maintenance and turf conditions going forward,” McConnell wrote. “I believe that the plan being implemented keeps the integrity of the course that Donald Ross first designed and built, but allows more challenges for the long-hitting players in vogue today.”

“Our goal is always to create a member-focused club that is not overcrowded on our fairways or at the pool; and we will manage to that plan,” McConnell said. “Our architect has developed this plan with much attention to detail and has been on property numerous times to ensure that Donald Ross’s last gem will be elevated to a whole new level.”

There are no member assessments as this project is funded entirely by McConnell Golf. “We are all partners and together we can achieve greatness for our long-term club enjoyment and golfing activities,” McConnell said. “It is our belief that after the renovation we will have the premier golfing venue in the region and applications for membership will increase.”

“This year offers the perfect excuse to travel out of town and play some of the other fantastic courses in our portfolio that you may not have enjoyed before,” McConnell wrote in his letter to the membership.

McConnell added that Jerry Mangum, Jim Barnes, Don Parent and Robert Carroll would be the first members to tee off when the club reopens. “These are our longest tenured RCC Members (notice I did not mention age!),” McConnell wrote. “One of them deserves the opportunity to set the new course record when play resumes.” 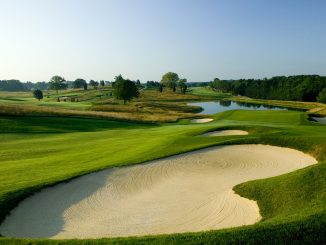