We are just days into 2008 and already the golf world is swinging into action. On the tournament side the PGA Tour gets into the swing of things today with the start of the Mercedes Championships (it looks like it could be a soggy one in Hawaii – boohoo).

On the business end of things we are just two weeks away from the annual PGA Merchandise Show. In 1993, when I made the trek to this annual gathering of the industry, this event was the highlight of the golf year. More than a thousand manufacturers would debut their new product lines and there were always some surprises. By the end of the four days our team at the magazine would be burdened down with crates full of slides (yes, slides) and press kits from all these companies.

Fast forward fifteen years later and the PGA Show has now turned into more of a social gathering. The fast paced nature of the business along with the boom of the Internet ensures that by the time the Show opens, most new product information has already leaked out. I say most because there are always a few little surprises and those are what keep me motivated to keep attending.

I expect that this year some will relate to the rules developments regarding equipment. New changes in the Rules of Golf promise to alter the golf equipment landscape a little in 2008. Clubs with shaft adjustability like those used by Callaway, Versus, and TaylorMade in their fitting systems are now legal to play. I expect this to be a hot topic at the PGA Show as other manufacturers will debut their own adjustable shaft systems and their will also be a major symposium at the show that brings together the entire industry, including manufacturers, retailers, golf professionals, governing bodies, and media to discuss it. Major US based retailer Morton Golf Sales, who is taking part on the Symposium panel, is already polling the hardcore golfing public for opinions on the matter through GolfWRX.com, a major online golf forum where they are a sponsor. The opinions have been very interesting to say the least.

As far as equipment is concerned the show will likely just act as the “official” debut for many products we know are on the way. Great promise is shown by many new lines, including those from MacGregor, Callaway, Nike, and Bridgestone among hard goods manufacturers. I would include Cobra and Titleist on that list but they do not display at the show. There is also plenty to see in clothing and accessories but I will leave that for another day.

For a taste of what 2008 will have to offer I plan to post a preview of new products and drop a few news items here between now and when I leave for the PGA Show on January 16th.

Enjoy the parade of news and items and let’s hope for an exciting 2008 ahead.

Nickent Golf continues to grow in stature. With the addition of John Hoeflich to their design team a couple years ago they have been able to offer a solid line-up of gear. Expect their visibility to be even higher in 2008. Their latest iron for better players is the 4DX Pro and it looks to be as sharp as the 3DX Pro the preceded with the incorporation of even more technology. 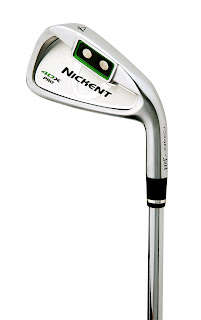 On a related note…equipment wise…we will have some breaking news about a couple shaft manufacturers posted here before the PGA Show…just finalizing the interview arrangements.

On an unrelated note, for golf swing aficionados, check out Vijay Singh, the defending Mercedes Championship champion this week. He was working on a backswing change late in the season in ’07 and says he refined it even more in the off-season. He is still not 100% comfortable with it so we will have to see how that turns out. At his press conference in Hawaii yesterday he also mentioned working hard on his short game and some driver experiments. All something to watch for today.