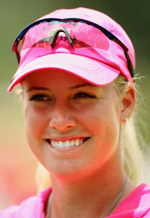 After becoming a smashing success (literally) on the Champions Tour, where they have a high number of staff players including the likes of Tom Watson, Adams Golf is taking things in a new direction with a recent staff player signing.

Brittany Lincicome, the 2006 HSBC Women’s World Match Play champion has jumped ship from Titleist to become the first LPGA Tour endorsee for Plano, Texas based Adams Golf. At 21 years old, the young talent is hard to miss with her height of 5’10” and a powerful swing. She finished the 2006 LPGA Tour season, her second, at 14th on the money list.

With the cost of signing PGA Tour players to equipment contracts so high, the LPGA seems to be a logical choice for Adams, a company that prides itself in creating equipment for the average golfer through to the professional player. They have achieved some market penetration on the PGA Tour, mostly in the hybrid category, but it has been by the quality of the equipment alone, without any paid staff players, save for the struggling Bubba Dickerson. With a primary target audience of average golfers, seniors, and ladies, the LPGA tour and its players is probably a wise avenue to pursue from a marketing perspective.

“Brittany is a rising star on the LPGA Tour and we’re excited about her future success. Not only is she a champion, she also puts on a show for spectators with her engaging personality and exceptional ball striking ability,” said Chip Brewer, Adams Golf CEO and President. “Only her second year on tour and she’s made a name for herself with an impressive World Match Play Championship and a handful of Top 10 finishes throughout the year. Brittany’s ‘All-American girl’ persona and the way she plays the game with enthusiasm and aggressiveness makes us proud that she will represent Adams Golf on the LPGA Tour.”

For 2007 Lincicome will play Adams equipment (no word on configuration yet), wear the Adams Golf logo, and her caddy will carry a Adams staff bag.