The quality Canadian representation on the LPGA Tour continues this week.  After a third place finish by non-member Brooke Henderson on Sunday at the Swinging Skirts LPGA Classic, a veteran player decided to make her presence known today.

Hamilton, Ontario’s Alena Sharp posted a bogey-free 4 under par round of 67 Thursday at the Volunteers of America North Texas Shootout near Dallas.

Currently sitting in 250th pace in the Rolex World Rankings and coming off a missed cut in San Francisco, on Twitter over the last few days the 11 year veteran of the tour pointed to Henderson as part of the reason for her turnaround.  The two have been buoying each other on.

Advice goes both ways with @BrookeH_Golf She told me don’t think just swing/putt. Golf can be that simple. It’s my mantra this week!

The 17 year-old Henderson, who two-spot qualified by winning a playoff on Tuesday, is still riding her wave a good form.

The Smiths Falls, Ontario golfer was prominent on the leaderboard for most of the day and received a lot of broadcast coverage on The Golf Channel.

A final round bogey dropped her to two under par, 69, on the day but she still shares 23rd place.

The LPGA Tour seems to like the attention the rookie pro is brining to the circuit, they’ve made sure to provide plenty of content from here for the interested media members (see video below).

Unfortunately the day did not got as well for the rest of the Canadians in the field. Rebecca Lee-Bentham posted a 75 (+4) while Sue Kim and Jennifer Kirby were a stroke higher. 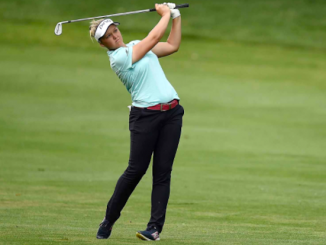 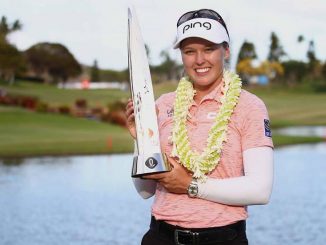 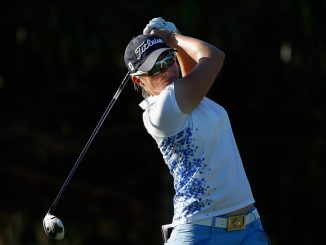 Sharp Sinks In Third Round of Blue Bay LPGA