The man who got it all started is out at Golf Town. Rumours swirled earlier this week (Robert Thompson of CanadianGolfer.com posted this story on December 7th) that Stephen Bebis had parted ways with the company he started in 1998 and that was confirmed yesterday.

Bebis was the Chief Executive Officer and President of the Golf Town Income Fund, which had been acquired by OMERS (Ontario Municipal Employees Retirement System) in 2007 for a cost of $233 million, including the repayment of $19.2 million in existing debt.

When we contacted John Pierce, Vice-President of Public Affairs for OMERS,yesterday he provided this reply regarding Bebis. “I can confirm that as of this week, Stephen Bebis is no longer with Golf Town. We do not have a statement or further comment at this time.”

There is no word on what instigated the move but the obvious suspicion would be that OMERS, voted the Global Pension Fund of the Year 2011, Canada, by World Finance Magazine, was not happy with the returns or the direction of their investment. Under Bebis’ direction the company recently completed an aggressive $25 million expansion in the U.S. with six stores opened near Boston.

OMERS has very high benchmarks for the rate of return on their Private Equity Investments – it was equal to 22.21% in 2010. Their annual reports indicate that they want to take a more active role in the management of their investment portfolio with a goal of actively managing 80% of their Private Equity Investments directly by 2014. This number sat at only 43 percent at the end of 2010.

OMERS controls over $54 Billion in net investments for more than 400,000 members. Approximately 1 in every 20 workers in Ontario is a member of OMERS.

In 1998, Mr. Bebis returned to Canada to found and manage Golf Town.

There is no indication who might replace Bebis but with more than 50 stores and a dominant position in the Canadian golf retail industry, you can expect that a person to guide the business will be named shortly.

A U.S. based writer, Emily Kay of Waggleroom and the Boston Golf Examiner, is indicating that the Interim CEO will be Ron Hornbaker. Hornbaker had been serving as the Vice President of Sales and Operation for Golf Town.

We have yet to receive official confirmation of that appointment. 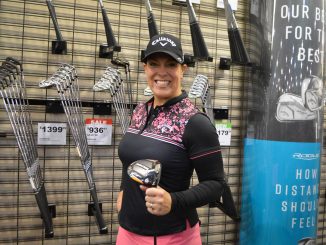 Lisa “Longball” Makes A Stopover In the National Capital