It’s a long season ahead, but Brooke Henderson put a very positive early spin on the year in her opening round at the LPGA’s Diamond Resorts Tournament of Champions.

The 21 year-old Canadian was one over par through two holes at the Four Seasons Golf & Sports Club in Central Florida, but she swung things in her favour very quickly. And then did not look back.

Facing a field of just 25 other LPGA winners from the last two season, but also playing alongside a celebrity (NBA Hall of Fame member Ray Allen), and an amateur (Diamond Resorts CEO Michael Flaskey), Henderson bore down to move under par by the time she walked off the 7th green.

The now 7-time LPGA winner kept things moving in the right direction on the back nine starting with a birdie on the 11th…and she kept it rolling.

The 2018 Canadian Press Female Athlete of the Year torched her way to the clubhouse, adding four more birdies to reach -6, and post an opening 65.

It has her in a share of the lead with Eun-Hee Ji, the 2009 United States Women’s Open Champion.

The format for this event, with the players teeing it up with a celebrity and amateur, is more like an early week pro-am, and Brooke had to remind herself early in the day that, in fact, it was a tournament round where score really did matter.

“Yeah, I had to remind myself it wasn’t Wednesday afternoon, it was Thursday, and I had to get a good score together. I think that’s when things kicked in on the front nine. I started getting a couple of birdies to recover from that bogey, and then from there I was ready to go and made a lot of birdies.”

Even though this tournament in only in its first year as an official LPGA event, Brooke has played in it the past two seasons (including a top 10 finish in 2018), so she feels right at home. Her score further proved that.

“Playing this tournament two years in the past really helped out a lot. I recognized a lot of the people. They recognized me. It’s just something that makes me a little more comfortable out here. And knowing that I played well out on this golf course also gives me some confidence, especially when we’re playing up a little bit shorter too. That’s nice. It gives me a little break.

So, yeah, I’m just happy with how today went. Hopefully, I can just continue that tomorrow.”

Henderson and Ji have a one stroke lead over Stacey Lewis and Lydio Ko who shared 3rd place at -5. Lexi Thompson, Ariya Jutanugarn, and Mirim Lee each posted -4.

To see the updated leaderboard this week, follow this link. 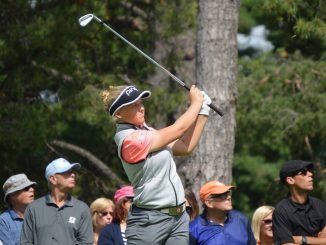 Freewheeling – With The Cut In The Rearview Mirror, Brooke Henderson Accelerates Her Game 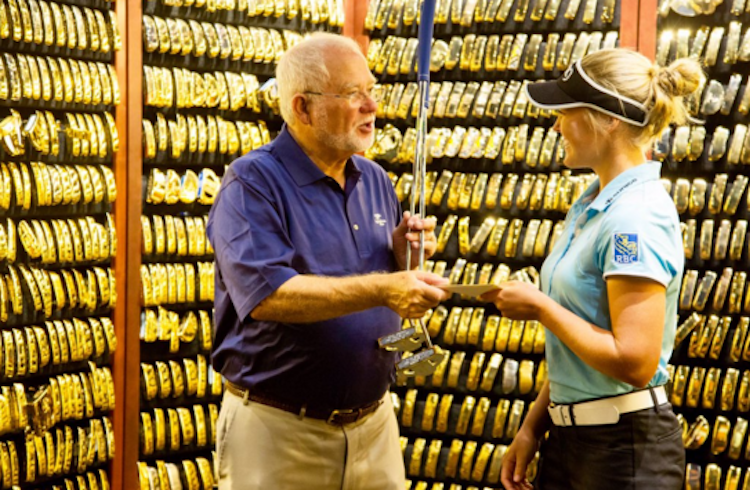 Brooke Gets Her Gold Putter From PING (New Video)

Brooke Henderson Will Need To Rally At ANA Inspiration