This week was a busy one for The Great Lakes Tour.

The developmental tour based in Hamilton, Ontario revealed support behind a new pro-am event in Belleville and a fresh affiliation with a mini-tour based in Ohio.

On Tuesday, The Great Lakes Tour co-owners Jim Kenesky and Colin Murray were on-hand in Belleville, Ontario as a new Pro-Am to support the local Big Brothers Big Sisters chapter was announced.

The J&T Classic Pro-Am (named for event founders Jodie Jenkins and Tim Howard) will feature 24 amateur teams with a pro for each team competing at the Trillium Wood Golf Club just north of the city.

The event is already almost sold out on the amateur side of things. It is expected that Great Lakes Tour members will be taking up many of the professional spots as the event will now be part of the tour’s schedule.

On Thursday The Great Lakes Tour announced that they had formed a relationship with the newly developed Buckeye Tour. That tour is based in North East Ohio.

The new tour is the brainchild of Jake Scott, an Ohio native who won twice on The Great Lakes Tour. The alliance is meant to give members of each tour exposure to another tour in a nearby market.

“Jake is a tremendous professional and his passion for the game of golf is second to none,” says Great Lakes Tour President Jim Kenesky.  “This relationship with The Buckeye Tour in North East Ohio will give our members and players further opportunity to compete during off weeks from the Great Lakes Tour and Circuit Canada Pro Tour.”

For more on The Great Lakes Tour visit their website at this link. 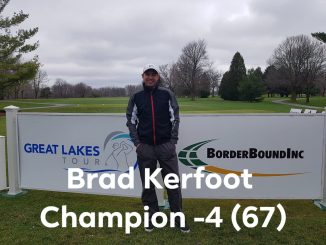