It was a big weekend for a trio of Canadian golfers at Kent State University. No, they weren’t celebrating Thanksgiving back in their home country, each was being inducted into the Sports Hall of Fame at their Alma Mater.

Appropriately, PGA TOUR members Corey Conners, Mackenzie Hughes, and Taylor Pendrith were recognized by their school together as part of a 14-person class of 2021 for the Varsity “K Hall of Fame at the Ohio school.

The three Ontario golfers all competed together for the Kent State Golden Flashes in 2012, a team that would go on to finish 5th in the NCAA Championships.

Conners,29 of Listowel, Ontario, became a winner on the PGA TOUR in 2019 at the Valero Texas Open but had a storied amateur career as the 2010 Ontario Amateur Champion and winner-up at the 2014 U.S. Amateur.

During his time at Kent State he recorded five wins, was a three-time first-time All-MAC and All-Region golfer and a two-time MAC Golfer of the Year and PING All-American.

The thirty-year-old Hughes won the 2016 RSM Classic on the PGA TOUR in his 5th start as a member. He had won the Price Cutter Charity Classic earlier that year on the Korn Ferry Tour, adding to a win in 2013 on the Mackenzie Tour. That makes him one of few golfers to win on all three circuits.

While at Kent State the two-time Canadian Men’s Amateur Champion had three individual wins including the 2011 Mid-American Conference (MAC) Championship. Hughes was a three-time first-team All-MAC and All-Region golfer and the 2009 MAC Freshman of the Year.

Taylor Pendrith, 29 of Richmond Hill, Ontario, is the last of this group to make it to the PGA TOUR, securing his status this year. A two-time winner on the Mackenzie Tour in 2019, Pendrith was remarkably consistent on the Korn Ferry Tour in 2020/21, locking up his status very early in the extended season.

At a school with a remarkable golf history, Taylor is one of only three golfers to make the NCAA Championships in each of his four seasons playing at the school. The winner of the 2013 MAC Championship was also the Golfer of the Year for the conference that year, and shared the same honour with Conners in 2014. He had two collegiate wins while at State and was a three-time All-Mac golfer.

Congratulations to Corey, Mac, and Taylor on their latest recognition. 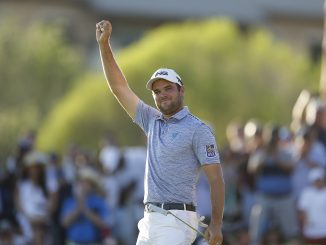