But he was now tied with Hugo Denis from Le Mirage Golf Club. Hugo had entered the final round tied for 6th place overall and his bogie free round of 6 under par 66 propelled him into a tie for the Junior Championship and gave him the outright win in the Juvenile Championship for juniors aged 16 and under on the final day of the championship.

After the scores had been entered, tournament officials announced that a sudden-win playoff was necessary to declare a Junior Champion and that play would commence immediately on the par 3, 8th hole which measured 170 yards.

First off the tee, Hugo pushed his tee shot into the right rough beside the green while William landed his tee shot on the green some 30 feet away from the hole. Hugo chipped to around 4 feet and marked his ball. William narrowly missed his birdie putt and tapped in for his par. Hugo then took his first bogie on the day as his par putt missed the hole.

William shook hands with Hugo and then received a big hug from his dad Louis who had followed his play throughout the tournament.

Flagstick caught up with the 2019 Golf Quebec Junior Boys Champion and asked him about his first Provincial Championship win.

“It feels good”, were the first words out of the mouth of the new Provincial Champion. He continued, “I came close a lot of times and I haven’t won in a while so this feels good. In the final group today I played with Logan (Boucher) and we’ve played together in other tournaments and I met James (Newton) for the first time and we had fun today. On the front nine I started out good with two birdies on the first three holes and another on the sixth. But I bogied three times from the fairway also so I reminded myself to stay patient on the back nine. I birdied the 13th-hole and bogied the final hole for an even par round so it was a pretty good day. I was hitting some pretty good shots but my putter was a little cold but I wasn’t nervous at all.

It’s the first time I’ve been here (Rockland Golf Club) and it was awesome. The people were very nice and the course was nice too.”

Although he wished that he could have won both championships, Juvenile Champion Hugo Denis was quite happy with his final round today and his second place overall finish. As he stated after his round, “This morning, I would never have dreamt that I could catch up to the leaders.” Hugo played in the group immediately ahead of the leaders.

Rounding out the top ten in the Golf Quebec Provincial Junior Championship were 2018 Juvenile Champion Logan Boucher (289) from Summerlea; Royal Ottawa’s James Newton, Royal Quebec’s William Forgues and Pinegrove’s Frederic Rousseau in a tie for 4th at 290; Rosemere’s Alexandre Mercier alone in 7th with 291; Mississippi’s Ellis Kinnaird alone in 8th at 292 and tied for 9th at 293 were Lorette’s Jean-Christophe Gagnon and Ki-8-Eb’s Jean-Philippe Parr.

Congratulations to all of the competitors, volunteers and officials in Golf Quebec’s Provincial Boys Championship. Congratulations also to the members at Rockland Golf Club for giving up their golf course for portions of the five days as well as the management and staff at the Rockland Club who welcomed competitors and family members throughout the week.

On a personal note, I would like to thank University of Ottawa Political Science and Communications student Kiara Murphy who accompanied me on the back nine of the competition following the last group and asking many questions about my job with Flagstick Golf Magazine. 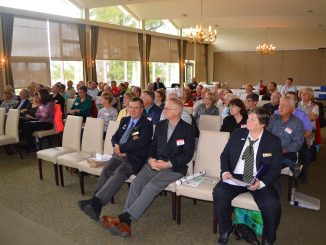 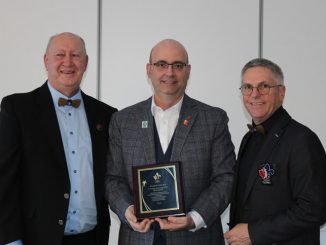 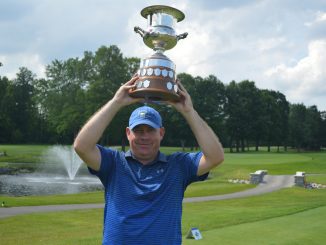 Robert Mackay Wins the 68th Alexander of Tunis at Rivermead