We were saddened to hear of the passing of Eddie Dunn last week. The Life Member of the PGA of Canada and Ottawa resident had a huge impact on many people, both within his family, and in the game of golf where he spent most of his life.

In July of 2000, Flagstick Editor Scott MacLeod sat down to chat with Dunn about his life in golf, producing the profile you can read below. We think it shares what a special man Dunn was, and how golf become the foundation of a life well lived.

We pass on our sincere condolences to his family and friends. He will be missed.

Eddie Dunn and the game of golf have been a unified force for most of Eddie’s 69 years. Few people have served the game as long in their lives and few people have known a better golf professional than Eddie Dunn.

Eddie was introduced to the game at the tender age of nine. “I was a bit of a mouthy kid,” says Dunn. “I had two brothers that caddied and my mother insisted they take me along. It was the best thing that could have happened to me. They drilled me into saying ‘yes sir, no sir, yes mam, and no mam.’” With all that drilling Eddie thought he was ready for his first looping job but was very nervous when the time came. “The man asked my name and I said, ‘Sir Edward Dunn,’” Other caddies heard this slip of the tongue and he was labelled Sir Edward for a while in the caddy yard.

Caddying at Rivermead in Aylmer, Quebec introduced Eddie to the game of golf and he played every chance he was given. “As caddies, we got to play one tournament a year before we went to school,” he reminisced. “The C-Class caddies played seven holes while the A and B caddies got to play eighteen.” As for the competitive of the tournament, Dunn was blunt. “There were more fights than golf challenges with those caddies.”

Eddie, his brothers, and other caddies would play McKellar Park Golf Club or just hit balls whenever possible. “Anything to be around golf,” he says. Growing up on Armstrong Street in the west end of Ottawa meant it was a long way to get to Rivermead across the Ottawa River for their caddying duties and the club had that figured out, according to Dunn. “We had little green flags with an ‘R’ for Rivermead on them and we used to go down to Island Park (Drive) and wave them, hoping for a member to see us and give us a lift.” If they were not successful, they would have to spend a nickel for the Aylmer Streetcar.

He stayed involved with golf and in 1948 Stan Kolar was looking for an assistant professional at the Gatineau Golf Club. Dunn applied and secured the job. Kolar would be a great influence on the young Mr. Dunn. “He was a great player and really taught me a lot.” When Kolar left for the Chaudiere Golf Club in 1950, Eddie followed.

Although Dunn moved on to a head professional job of his own in 1954, he kept a lifelong association with Kolar. The pair ran an indoor golf school together in the early 1950’s. They had two locations, one at Melrose in the west end and one at Lyon and Kent in downtown Ottawa. “We had 300 members. It was a busy school,” he says of the winter venture.

In the Fall of 1953 Eddie interviewed for a Head Professional job at Mississippi Golf Club in Almonte, Ontario. He was hired and became their first Head Professional. The job suited the affable young pro who became a part of the community quickly through the help of a local businessman. “Mr. Collie owned the mill in Appleton and he employed a lot of people. He really encouraged them to support me and my pro shop.” Dunn would sometimes go fishing for pickerel near Mr. Collie’s Mill for relaxation. Dunn taught quite a bit at Mississippi, applying the skill that had been handed down by his former boss, Stan Kolar.

Something that Dunn remembers with fondness about Mississippi was a dog he had while he was there. “It was a part collie, part lab named Duke and he would go into the creek, go underwater, and fish out balls.” He left Duke with the assistant professional when he moved back to the Gatineau Golf Club in 1956.

Eddie held the position at Gatineau Golf Club until 1969. “I went back for the people; they were blue-collar workers and really nice people,” Dunn explains.

Gatineau had a very well-known nightclub and Dunn had a great opportunity to rub elbows with some of the most famous stage acts in the world. He even had a chance to give golf lessons to many of them. Some of the ones that came to mind for him were Celeste Holm, the Crosby Boys (sons of Bing Crosby), Phil Harris, Jack Carter, Myron Cohen, and Flip Wilson.

“It was quite the wild place. In fact, I had to get one of the young guys to come in at 5:30 in the morning just to clear the beer bottles off the first tee,” he shares.

He also reflects that one of the hardest things about being at Gatineau was the owner, Joe Saxe. “He was a tough guy and I quite about three times a year but stayed anyhow,” he says of the well-respected man. “Joe sure was influential as far as business sense though,” he adds. During the same time period Eddie spent the winters teaching in Florida but that ended when his three children, Tony, Gregory, and Susan became school-aged.

Dunn’s family is important to him and he is proud of how they turned out. By coincidence, son Tony is currently the Head Professional at the Chateau Cartier Resort in Aylmer, Quebec, the former Chaudiere Golf Club where his dad once plied his trade.

After Gatineau, Eddie’s next position spanned the next twenty-four years and took him out of the region for the first time in his working life. He picked up the family and headed east to the Fraser Edmundston Golf Club in New Brunswick in 1970.

“I loved it there; the people and their camaraderie were great.” Dunn also says it was ideal for his kids who all grew up to be fully bilingual. They also had the opportunity to get involved in skiing, with all the kids eventually becoming certified ski instructors. Despite that, Eddie didn’t find he took to the ski slopes as well as the golf course. “I would snowplow all the way down the hill until my hips hurt,” chuckles Dunn as he tells of his slopes experience.

Edmundston also had something that really appealed to Eddie, a 5-hole junior course. “I had some really good juniors there because they had their own course.”

Eddie’s love of, and skill at teaching has touched many players. That included Eddie’s other son, Gregory, who was taught by his father and carries a two handicap today. Eddie still indulges in teaching by helping out with the junior program at the 19th Tee Driving Range in Nepean. “There is nothing better for the kids,” he states.

In 1994, he was given the biggest honour of his career, Life Membership in the Canadian Professional Golfer’s Association. “It made me very proud to be made a life member for my years and for my integrity and respect for the game,” says Dunn of the recognition.

Eddie also wants people to know that it wasn’t him that had the hard job; it was his beloved wife, Bim. “The toughest job is being the wife of a golf pro. I am just happy that she put up with me and that we can enjoy golf together now,” referring to the three games a week he still plays at Chateau Cartier.

When asked about his own golf ability during his career, Eddie is humble. He says he did not win a lot but records prove he contended in many pro events. “The problem with me was focus,” he recalls of his tournament play. “I would be going along well and then the guy with me would start playing poorly and I would want to help him out more than worry about my game.”

One of Eddie’s proudest playing moments came at a pro-am at the Cedarhill Golf & Country Club when he played with Ernie Wakelan, the professional at Royal Ottawa Golf Club. He had known Wakelan for 35 years but they had never really seen eye to eye. They won the tournament and when they picked up the trophy Wakelan looked at Eddie and told him, “I think you are one hell of a player.” That meant a lot to Eddie and he remembers the day fondly.

When not playing golf, or helping out with juniors, these days Eddie also finds time for his other hobby, refinishing wooden furniture. He says he works at it when he wants to but enjoys keeping busy with his hands, using the same refinishing skills developed under Stan Kolar to refinish wood club heads so many years ago.

Eddie’s first impression of golf was a lasting one and he says it stayed with him through the years, at all times. “I think golf impressed me from the start with the rules and the feelings you got at the golf course. You learned to not only respect the game but everything around you. It influenced everything in life for me.”

That influence was passed on to many others throughout the years and the world of golf is lucky that “Sir” Eddie Dunn became a caddy at Rivermead. His service to the game should be admired and not only did it enrich his life, but in turn it enriched the lives of many more people through his involvement with the game of golf. 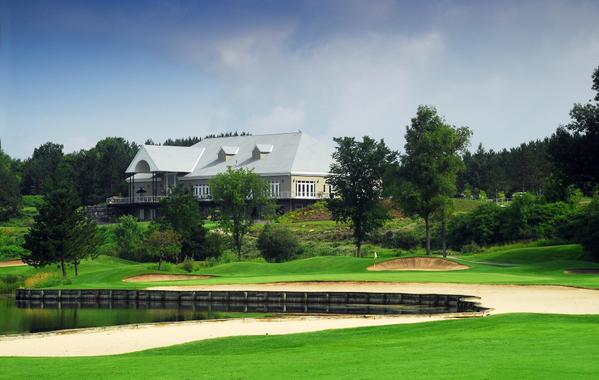 Barber, Gunn, Beale All In Contention At Club Pro Championship