One of the elder courses of the eastern Ontario golf community it celebrating a centennial this year in style.

The nine-hole course will celebrate that founding this year, at the same time honouring the founders and the 41 predecessor Presidents and Officers that have ensured the continuation of the club.

As part of the activities to recognize the club’s momentous occasion, on June 17 they will also be hosting members of the Golf Historical Society of Canada who will play a period authentic golf match from the days of when the club came to life.

They will wear period costumes and make their way around the historic layout using hickory-shafted clubs, playing by the rules and customs of the 1920’s. Members are being welcomed to join them in a four-person scramble, all with the chance to wear clothing more akin to what their founding members would have worn.

The club that is located just a kilometre west of the town of Gananoque, along the shores of the St. Lawrence River, will have an official centennial commemoration ceremony on Saturday, August 21st. It will take place on the club’s 9th green, just below the clubhouse deck. It will feature elected officials – Federal, Provincial and Municipal, Club Members, Club Directors and members of the general public (Covid protocols permitting).

The club says they will provide more details in the days to come about other centennial events that will take place during the season. They will include youth tournaments, a Drive, Chip & Putt contest, “Speed Golf”, and various golf tournaments.

Keep an eye on the golf club’s website here as the year progresses. 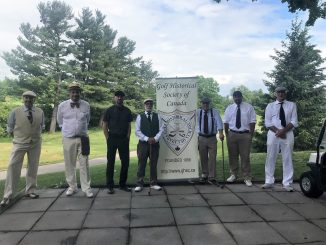