Nadine Lamarche didn’t have to imagine a world where the most tumultuous emotions someone can feel in their lives happened at, essentially the same time, because she lived it.

Elation. You have your first child. He’s happy and healthy.

Shock. Three months later, you find out you have cancer.

But, as with emotions, there is usually an up and a down. Lamarche is on the up. In 2015 she celebrated two years of being cancer-free.

On Monday, June 15th, she was one of the near-60 PGA of Ontario professionals who were on site at the second annual Golf to Conquer Cancer event at Coppinwood Golf Club in Claremont, Ont. and Granite Golf Club in Stouffville, Ont.

“Once I saw the professionals could go, it was a no-brainer for me to reach out and help support any way I could,” said Lamarche.

Despite being involved with golf for more than 15 years, Lamarche and her husband just joined a private club recently – the Oshawa Golf & Curling Club – but it was for a good reason.

“I was one year clear (of cancer) and we came to a point when we needed to do something for us. We had to stop thinking about what you’ve been through and start living again. We played more golf last year than I should admit,” Lamarche said, laughing.

So what exactly did Lamarche go through?

During a routine physical in 2006, Lamarche’s doctor found a multinodular goitre on her thyroid — something that is, according to Lamarche, quite common. She was told not to worry about it. The biopsy she had was inconclusive, and she was able to live her life.

Lamarche had annual ultrasounds to monitor her thyroid. She had her first child in 2012, and during a post-partum ultrasound, it showed a considerable difference from her initial one.

She had the left side of her thyroid removed, which is a standard procedure in case it wasn’t cancer. If there were nothing, she would still be left with some of her thyroid.

But, that wasn’t the case.

The week before Christmas in 2012 Lamarche had the other half of her thyroid removed.

“Through that surgery I lost my voice for six weeks. So I had just had a baby, it was Christmas, I had no voice, and I had cancer,” Lamarche said.

But like any golf professional, Lamarche wasn’t just going to sit around during the Canadian winter. Her new young family went to Florida for two months, where she regained her voice and delayed having a second surgery.

That one would happen at the Princess Margaret Hospital in April 2013. It was successful and her doctors told her she was cured.

“I hadn’t digested that I had cancer. I had this feeling I had cancer, but nothing was definitive,” Lamarche explained. “It wasn’t until my second major surgery that they said, ‘this part of your body had cancer and we need to take out the other part in case it has cancer, too.’ I just didn’t have time to process the ‘what ifs’ of the diagnosis.”

After her meeting at Princess Margaret, the worrying could stop.

“I was standing in the lobby, where there are a lot of very sick people and I broke down. My son was 13 months old and I felt I missed half his young life in worry,” she explained. “It was a dark shadow that was there. It really makes you appreciate what you have, because there isn’t a day that goes by that I don’t think about how I had cancer.”

The 39-year-old is now a professor of sports management at Durham College. She was involved with the Professional Golf Management program at the college from 2006 until 2015, including during her fight with cancer. She also had a stint at the Golf Association of Ontario as the Tournament and Player Development Coordinator. She started her career as a golf professional at Markland Wood.

While at Golf to Conquer Cancer, each foursome enjoyed the company of a PGA of Ontario professional like Lamarche.

Nationally, the PGA of Canada’s charitable partner is Prostate Cancer Canada, so aligning the PGA of Ontario with this event “just made sense,” said the organization’s Executive Director Kevin Purcell.

In its first year, the tournament raised more than $800,000 for cancer research at The Princess Margaret Hospital. The event was so popular that it added a second course (it was only at Coppinwood in 2014) and participants raised over $1.3 million.

“To raise the bar the way we have and raise $1.3 million in just our second year is a major accomplishment,” said Paul Alofs, president and CEO of The Princess Margaret Cancer Foundation.

“It was an incredible day at two of Ontario’s best private golf courses,” continued Nick Taylor, director of new revenue and chief golf officer at The Princess Margaret Cancer Foundation. 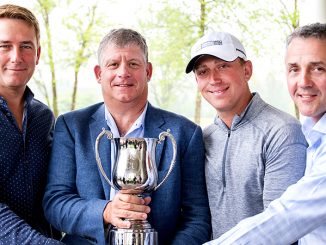