The Ottawa Valley Golf Association (OVGA) held their Annual General Meeting at the Rivermead Golf Club on Saturday, April 23rd for Club representatives from OVGA Member Clubs and there is ample news to report.

Of major importance to OVGA golfers is the news that an agreement is now in place between Golf Quebec and Golf Ontario (formally the Golf Association of Ontario) which allows OVGA players to play in events in both Ontario and Quebec, regardless of which Provincial Association their Club is affiliated with. This collaborative initiative was jointly announced by Mike Kelly and J. P. Beaulieu, Executive Directors of Golf Ontario and Golf Quebec, respectfully.

This is news a long time in coming. It is reassuring to see both provincial bodies work together in providing access to tournaments in both provinces to OVGA golfers.

On the agreement, Mr. Kelly stated – “In the interest of increasing the opportunities for OVGA golfers to play in Ontario and Quebec events, we think that together we can make the Ottawa region stronger. This is about golf.”

The details of this agreement will be formally announced once it is signed by both Provincial Associations.

Mr. Kelly and Marcel-Paul Raymond, President of Golf Quebec, brought greetings from their respective organizations and wished all member clubs and their members a successful golf season.

On that note, the OVGA is always open to more volunteers to assist in all of their operations. If you have time, please give the OVGA office a call.

Neil Colbert, OVGA Treasurer, reported that the OVGA is in a good financial position after showing a small profit in 2015.

Marg McCornock, OVGA Director for Handicap and Course Rating, reminded Clubs that they need a handicap committee and committee members have to be re-certified on a regular basis. She also reported that six golf courses were rated last year and nine are scheduled to be rated this year.

Gerry Bower, OVGA Rules Director, was pleased to report on the very successful tournament pace of play program as well as the large number of level 4 accredited officials as well as numerous other rules officials in the OVGA.

Marc Ffrench, OVGA Tournament Director, reported on various new initiatives for the OVGA. Chief among them is the appointment of Bonnie Wolff as the OVGA Men’s Tournament Director. Other initiatives included a few Men’s and Women’s events being held at the same Club at the same time including the OVGA Women’s and Men’s City & District Championships; the running of OVGA Intersectional sites would be the responsibility of the host club; the appointment of Jeff Gunn, PGA of Ottawa Professional as the OVGA Team Coach for Golf Quebec competition and that the OVGA Junior Intersectionals will have a new one-day format on Wednesday, August 17 bringing them in line with all other OVGA Intersectionals.

Dianne Illingworth, OVGA Women’s Tournament Director, reported on the 2015 season as well as the 2016 schedule where event dates have been rescheduled to avoid conflicts.

Flagstick Golf Magazine and Flagstick.com wishes the OVGA,as well as their member golf clubs and their members and golfers in general, a successful 2016 golf season. 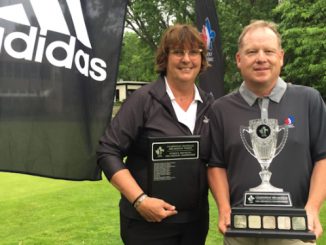 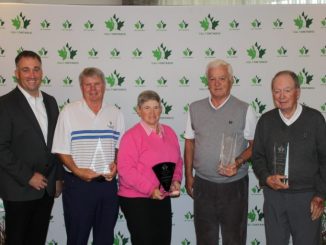