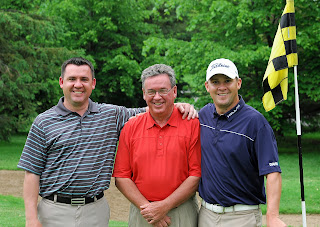 As expected the Jon Mills day at the Bay of Quinte GCC on June 5th was a resounding success. It raised much needed funds for the junior golf program at the club and the local Boys & Girls Club benefited as well. It was a family reunion of sorts with Jon joined by his brother Jeff on course and with other family members in the crowd including his father Dave. (Jeff, Dave, and Jon Mills pictured together – right)

As always Jon was very liberal with his time, making great effort to talk to as many kids as possible, reunite with old family friends, and generally continue to be an ambassador for PGA Tour players in Canada. He also availed himself to a few of us media types, many who remember him as far back as a young junior golfer. Not too many years later he is now on playing on the world’s grandest stage.

Coming off a fine final round at the Memorial and a grueling, yet satisfying playoff where he earned a spot in the U.S. Open that begins tomorrow he is understandably excited at what the coming week has to offer. “It was long process, especially coming off the long week at The Memorial, playing well there on Sunday, then you have to get in the morning and play 36 holes. You know, it’s funny, early on in the qualifier, on the first hole I had a birdie putt and I ended up making it but as we were walking off the green I told my caddy Randy “Man, I am just not focussed. I was thinking more about the Pens (Pittsbugh Penguins) game. But it ended up I got refocused, played well the second round and ended up making it,”” he told me.

As for how his success (68 in the last round) at The Memorial might translate to this week in San Diego Jon assured me that it could do nothing but help. With rock hard greens and ample rough Jack’s setup in Ohio mirrors some of the conditions at Torrey Pines. “It can’t do anything but give me confidence,” Jon stated. “Playing with some of the best players in the world an going out there and having a good Sunday is great. Ball-striking wise it was probably was the one of the best, if not the best I have had as a professional. Just to do that, anytime someone does that is going to make your confidence soar. I am just going to keep doing what I have been doing to get to this point and hope to continue it.”

Two years removed from his first foray on to the PGA Tour Mils says he has left some swing issues in the rear view mirror with the help of his coach, Dave Woods, and expects he can do enough this time to keep his PGA Tour status, if not attain even higher aspirations. “We addressed that, worked on that and I haven’t had those issues in some time.” He says he is a lot more comfortable with his place on the tour now and can lean on the mistakes he made the first time around. “I am more comfortable with my game, my practice habits, time scheduling, everything. Two years ago I might have been trying to do too much instead of doing what I normally would do. “

Mills says in talking to other players that those are the typical rookie mistakes. “You just have to trust your own game and ultimately that is what it comes down whether it’s a regular event, The Memorial or the U.S. Open.”

We’ll see if he can stick keep that trust this week and, by reckoning, I think he just might surprise a few people. He may be the “3rd” name among the Canadian on the PGA Tour in ’08 but don;t be surprised if his is the one you just to hear about more and more.

For a slideshow of images from Jon Mills Day see the bottom of the Blog homepage.