While golfers in Ontario have returned to golf courses themselves, the logistics of tournament play, and related 2021 schedules, still seem to be shifting like desert sands. Many organizations have rescheduled or even cancelled tournaments.

For organizations like the Ottawa Valley Golf Association (OVGA), who run many events over the course of a regular season, this can get particularly complicated. With courses busier than ever, finding willing hosts and suitable dates also muddies that waters.

The association previously made some modifications to their 2021 schedule, and on May 26 their Board of Directors approved a new agenda for the year ahead.

“While golf courses are now open in Ontario, Golf Ontario, who oversee amateur competitions, have not been given a clear signal from Ontario Public Health to allow organized tournaments,” explained OVGA Tournament Director Dru Lafave in an email to Flagstick.com

He elaborated on the change in dates, indicated that they are erring on the side if caution, with an eye to Phase 1 of the Ontario re-opening plan scheduled for near mid-June.

“There is a possibility that we can run tournaments after June 2, but we may have to wait until the week of June 14. To be on the safe side, we rescheduled (for the second time) our Field Day at Casselview from June 8 to 22, and “Spring” Scramble, originally scheduled in the “Spring” on May 14, later rescheduled for June 11, to June 18.

All our 2021 tournaments are still planned to go ahead (schedule below). The last two weeks of June will be busy. The Intersectionals are a go, starting in July.”

Lafave says demand for events has been high, noting, “Registration for our two Field Days is strong, as they are qualifiers for the OVGA Match Play and Quebec Tunis. Registration for the Spring Scramble is almost full.”

On the Junior front, OVGA Coordinator Jim Davidson says the only change so far has been the previously delayed Spring Classic, which we reported some time ago. They are waiting on seeing how National schedules schedule change before considering the fate of that event.

For more information on the OVGA for 2021, visit their website at this link. 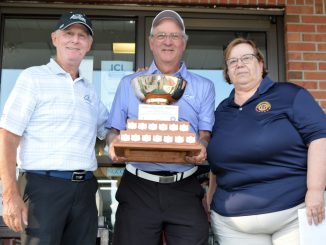