Their goal was to take home the OVGA Junior Cup in its debut for junior golfers.

On Saturday, pee wee golfers under the age of 13 teed up their golf balls on the Royal Nine course at the Royal Ottawa Golf Club under a bright sky with gusting winds.

The number of participants in the girls division was low but the competition was still friendly and intense.

Florence Ho from the Ottawa Hunt & Golf Club was the winner in the mosquito division and Rivermead Golf Club’s Gracelyn Xiao took home the Pee Wee OVGA Cup. Gracelyn was also the winner of the season long Order of Merit competition.

In the boys division, Chase Jerome from the Royal Ottawa turned in a score of two under par 68 on the Royal Nine course to win the OVGA Pee Wee Cup and the season long Order of Merit competition. He was followed in the day’s competition by Jimmy Galbraith from Le Maitre GC in Mont Tremblant and Karson Hurlbert from the Camelot Golf & Country Club.

Rivermead Golf Club’s Zander Zhang was the winner of the Mosquito Division of the Pee Wee OVGA Cup.

On Sunday, the overnight rain let up and another perfect day for golf on the Legacy course at the Greensmere Golf Club in the Carp sector of the City of Ottawa was enjoyed by OVGA bantam, juvenile and junior golfers.

The winner in the OVGA Junior Cup in the boy’s competition was Isaiah Ibit from the GreyHawk Golf Club with his score of one over par 73. He also took home the medal in the under 17 age group and was the Order of Merit winner in the Juvenile Division.

Hudson Turcotte from the Loch March Golf & Country Club was the Order of Merit winner in the Junior Division.

Congratulations to all of the junior competitors who participated in OVGA events during the year run by OVGA Director Jim Davidson and his team of volunteers and also the OVGA Officials who were at each event. Assisting Jim on the weekend also was Ryan Shaw from the Canadian Junior Golf Association.

Full scores from the weekend events can be found on the OVGA website at ovga.org. 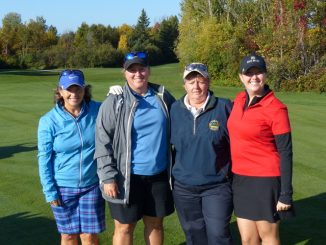 A Day of Perfection at 15th Greensmere Survivor Challenge