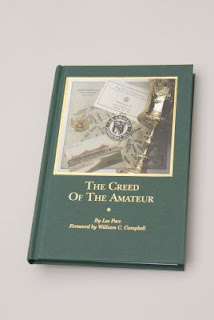 Sorry for the publishing gap of late – it’s been hectic on the print side of the things and in preparation for the busy summer season ahead.

One of my favorite golf destinations in the world is hosting the United States Amateur Championships this year and they have, as expected, plenty of pageantry planned for the occasion. Part of this will be the introduction of a new book dedicated to Richard Tufts the former USGA and Pinehurst President. Tufts, who had a fondness for amateur golf even crafted a creed on the subject in 1968.

On the eve of hosting the 2008 U.S. Amateur Championship in August, Pinehurst has dedicated a 160-page book to pay homage to Tufts and countless others who play every day for the pure love of the sport.

Written by Lee Pace with a foreword by William C. Campbell, the hardbound volume begins with Tufts’ full creed inscribed on a vellum overlay: “An amateur is one who competes in a sport for the joy of playing, for the companionship it affords, for health-giving exercise, and for relaxation from more serious matters. As a part of this light-hearted approach to the game, he accepts cheerfully all adverse breaks, is considerate of his opponent, plays the game fairly and squarely in accordance with its rules, maintains self-control, and strives to do his best, not in order to win, but rather as a test of his own skill and ability.”

The book’s five sections tell the tale of the creed’s continued role in the game of golf, with stories from some of the greatest names in the game – from Walter Travis to Chick Evans, and Jack Nicklaus to Tiger Woods, all of who won amateur titles at Pinehurst.

The book includes a significant section on the 1962 U.S. Amateur on Pinehurst No. 2, and finishes with a “Champions Gallery” of historic photos and stories of the greatest amateur legends.

“Before the 1962 Amateur, Richard Tufts produced ‘The Scottish Invasion’ to tell the story of golf’s influence in America,” says Pace. “I thought it would be a neat idea to follow in his footsteps as the 2008 Amateur approached. So much attention has been given to Pinehurst and the U.S. Open that I thought this would be a fitting testament to the place the amateur game holds at Pinehurst. It’s safe to say the Creed is alive and well in Pinehurst.”

Campbell — four-time North and South Amateur champion, 1964 U.S. Amateur champion and USGA president in 1982-83 — is among those featured. He wrote in the foreword, “I submit that the ‘purist’ legacy of Richard S. Tufts is not much an anachronism in today’s world of big-time sports, as it is an essential and timely reminder for us all – amateur and professionals alike – to play our game ‘all out,’ but with good humor and an open heart, and in the process to be our best selves.”

This is Pace’s third book to be written for Pinehurst Resort. It will be given as a special gift to all 312 players in the 108th U.S. Amateur, contested August 18-24, 2008 at Pinehurst.

“Hosting the Amateur is really going back to the real heart and soul of golf at Pinehurst,” says Pinehurst President Don Padgett II in the book. “For us to be having the U.S. Amateur is as significant to our culture and position in the golf community as hosting a U.S. Open.”