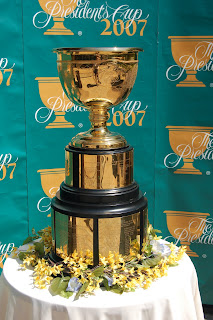 Canadian golf fans are in for a treat next month when The Presidents Cup will play out over the Royal Montréal Golf Club’s Blue Course on September 25-20. Many golf fans from the Flagstick Golf Magazine coverage region will also be making it to the matches so we thought we would provide a little preview of what to expect. For those without tickets who will be watching at home, there is just as much excitement waiting or you. The drama of match play is unrivalled in golf and when national pride is at stake, you can expect an exciting outcome!

It will be the seventh playing of this match play event that was developed to pit the world’s best non-European players against a squad from the United States.

A biennial event, it debuted in 1994 at the Robert Trent Jones Golf Club in Virginia where an American squad captained by hale Irwin defeated the David Graham led International Side by a tally of 20-12.

Since that time the event has visited Australia, South Africa, and made multiple returns to the Robert Trent Jones Golf Club. The United States Team has been victorious four times with the Internationals prevailing once. A tie was the fate of the 2003 matches held in South Africa, with a playoff hampered by darkness.

The Presidents Cup consists of 34 matches – 11 foursomes and 11 four-ball matches. There are 12 singles matches involving all players on the final Sunday. All matches are worth one point, for a total of 34 points.

The Teams
While Canadians are hoping that there will be some local representation on the team, International Captain Gary Player made it well known that he will choose the best team for the matches, “not one based on sentiment,” he stated at a recent press conference held at Royal Montreal Golf Club. Both Mike Weir and Stephen Ames are within the top twenty in points standings at press time, the only Canadian players who have a chance to represent the country in Montreal.

Members of the 2007 U.S. Team are selected based on official earnings from August 15,2005, through the 2007 PGA Championship. To little surprise, Tiger Woods is leading the charge for their team. International Team players will be chosen on the basis of the Official World Golf Ranking As of August 13, 2007. International Teams do not include players eligible for the European Ryder Cup Team.

The eligibility rankings are used to select 10 members for both squads. There are two Captain’s Choices who round out each 12-man team. The respective Captains for 2007 are Gary Player for the Internationals and Jack Nicklaus for the Americans. This will be the third captaincy for Player and the fourth for Nicklaus.

There is no purse for the winners of the event. Net revenues are divided into equal shares that the players and captains designate for charities or golf-related projects of their choice. The first six Presidents Cups generated more than $13 (USD) for charities worldwide.

Key Holes
Whether you watch live or on television there are several key holes that will play a factor in the matches. Unlike stroke play, players may never see the final hole if their match does end early. Therefore, unlike stroke play events, holes played early on could make a heavy impact. The course setup is usually done to provide some dramatic settings – driveable par fours and reachable par fives for example. After a recent tour of the course here are a few holes I think you should watch for:

Hole No.4 (501 yards, Par 4)
The 4th is considered to be the hardest hole on the front side, even for the best pros in the world. Playing uphill, it doglegs left with a very narrow landing area provided for the tee shot. It normally plays into the prevailing southwest wind. The kidney-shaped green is slim at the front and gaping bunkers guards the front of the putting surface.

Hole #6 (570 yards, Par 5)
The only par five on the front side (there are just two on the entire course) it is potentially reachable by the bombers with a downhill tee shot. Unfortunately a head wind is often a factor and the green surface and approach here are the biggest scoring factor. The elevated green sits on an angle to the fairway and two very deep bunkers grab any approach that falls short. The green has distinctive segments, especially near the back, that can make any putt tricky to read.

Hole #12 (570 Yards, Par 5)
Playing downwind and downhill, the entire field will have a chance to reach this green in two. A wide fairway allows players to blast away off the tee. Misplaced approached may provide surprising toughness for this hole and he green has some strong undulations. Shots landing on the front of the green may spin off rh front of the surface, even back into a bunker.

Hole #14 (369 Yards, Par 4)
The shortest par four on the course may be the “swing hole”; much like the 10th at The Belfry has been during Ryder Cup matches. It can be played as short as 300 yards making it a driveable par four where players can make a dramatic charge. They can also splash to defeat as a large pond guards the entire left side of the narrow green. This is THE hole to watch.

Hole #15 (448 Yards, Par 4)
If #14 does not impact scoring, this hole surely will. The tee shot is complicated by the presence of a pond that is set at an angle and forces players to shape their tee shots or lay back a bit. The trouble then becomes a green that must be reached over water to a narrow, bunker protected green. A devilish back pin placement brings all sorts of jeopardy into play.

A full DVD of the event will be available through the PGA Tour as of October 28th. See www.pgatour.com/presidentscupdvd for more information.