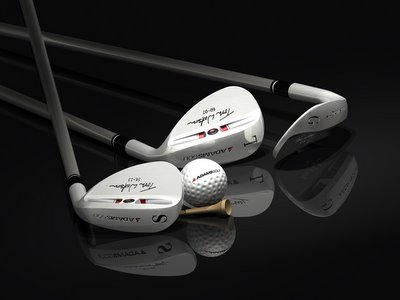 As realistic as it looks it is actually an image created by Nate Tierney and John Ruggeiro of Adams Golf R&D Department.

The image shows the new Tom Watson wedges that will debut in 2007.

The duo created the image with UG Software, the software of choice for the entire Adams Golf R&D Department.

The graphic was chosen by UGS (the software manufacturer) and will be included in the 2007 UGS calendar that is distributed worldwide. This link will show you the “Best of Show” winners in the 2006 calendar https://www.ugs.com/promotions/calendar2006/

The 2007 calendar will be printed and distributed in a couple weeks.

I thought it was a striking image so I thought I would post it here.

Thanks to the guys at Adams (KR, JW) for passing it along.