Raoul Menard was the winner of the 2017 Rideau View Pro-Am on Monday, August 21st with his fine score of 8 under par 64. This makes two in a row for him at Rideau View as he was also the winner in 2016.

Flagstick caught up to Mr. Menard and asked what this win meant to him and he replied that he was very appreciative of being able to play on this great course and that he felt at home when he played at Rideau View. On his winning the first prize of $10,000, he indicated that every bit helps him along out on the PGA Tour Canada – MacKenzie Tour and that he used the prize money last year at the PGA Q-School.

Raoul is currently 114th on the MacKenzie Tour having played in 7 events and winning $2,321 so the prize money at Rideau View was certainly welcomed.

One stroke behind Raoul with his score of 65 was Chris Williams and two behind at 66 was Riley Fleming. Tied for 4th place with scores of 68 were Chris Hemmerich, Aaron Cockerill and Christobel Del Sol. 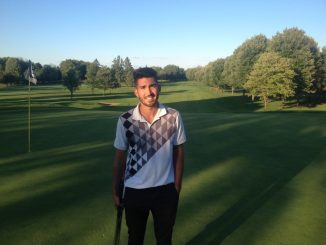