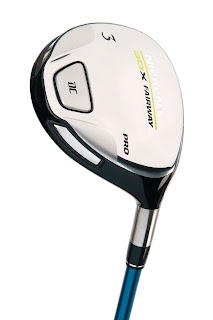 Ten years ago you would have been hard pressed to find even an avid golfer who recognized the Nickent Golf brand name. Today that has changed greatly – most significantly on the professional golf tours where their product is making an impact in a major way.

First it was their 3DX hybrid clubs that gained a strong market share despite an obvious lack of paid player contracts – and now the gamut is starting to run to fairway woods.

By turning their attention from the hybrids that brought them success on the PGA Tour, to take on the fairway wood segment, seems like a strange departure for Nickent. In fact, it is simply a renewed focus on their roots.

“Before the hybrid explosion, Nickent was always known as a driver and fairway wood company,” said Nickent CEO Michael Lee. “John Hoeflich and I decided to get back to our roots and this time design fairway woods exclusively with the PGA Tour player in mind.”

Their first weapon to use in the PGA Tour player fairway club pursuit? The 3DX Pro FW.

Nickent calls the 3DX Pro FW a “straight off the Tour van” product. A club developed specifically for the high demands of the tour player will be brought directly to the consumer – intended for use by accomplished players looking for particular playing characteristics. This hot, low launch, low spin prototype fairway wood will be available in limited quantities.

At the tail end of the 2006 PGA Tour, the 3DX Pro FW was put into play by multiple PGA Tour winners, and that popularity has carried over into 2007.

“This club was put into play by several PGA Tour players at the last couple of events on the PGA Tour and the buzz among players spread quickly,” said Lee. “In fact, many players said it was one of the finest looking fairway woods they have laid their eyes on. Then they hit it and immediately put it into play.”

The company says that designer John Hoeflich (who created some of the greatest club designs in history for companies like Tommy Armour and TaylorMade) made sure the tour players would take notice of the new design with both good looks and one-of-a kind technology.

The 3DX Pro FW actually features a .082 COR, equal to the hottest driver faces in the market today. Hoeflich also added two Tungsten Polymer XW inserts into the back of the club head to improve stability by way of a higher MOI. The inserts also act to reduce vibration for better feel sensation. They claim it is the first fairway wood to utilize Tungsten Polymer, which is the driving material behind the XW Insert technology Nickent now utilizes in irons, hybrids, and drivers.

To drive the trajectory of shots with this club down, more weight was built into the crown for a higher centre of gravity. This equates to a club that is most effective for higher swing speed players who desire a lower launch and spin to help create their preferred ball flight.

Another tour-like quality is that the 3DX Pro FW is one of the few tour shaped fairway woods that can be bent up to 4-degrees of loft and lie. This combined with the fact that it can be adjusted for directional control with its adjustable XW Inserts, and you have one of the most customized and tour spec fairway woods on the market.

The head cover that comes with the 3DX FW Pro will be stitched prototype, and the premium Aldila VS Prototype shaft that it will come standard with the club. The VS shaft was one of the most popular shafts on the PGA Tour last year and was in the bag of the US Open winner. The shaft weighs 81 grams and will be available in R, S and X flexes.