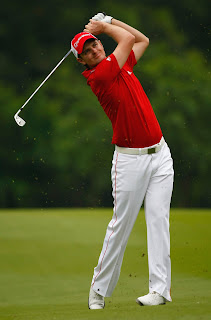 It is likely the second craziest week of the year for us here at Flagstick as we prepare for the PGA Merchandise Show in Florida next week. Of course that means that next week will be the busiest one of them all.

With the golf season underway a lot of information has been coming across the desk so I thought I would pass on a few items.

The Qatar Masters gets underway on January 28th and the Doha Golf Club will play host to a stellar field. It will include the season debut of Justin Rose (left) along with defending champion Adam Scott, Sergio Garcia, Ernie Els, Retief Goosen, Robert Karlsson, and recent Abu Dhabi winner Paul Casey. A lot of attention will likely be given to Boo Weekley as he makes first appearance in the Middle East.

In other news, TaylorMade brought out their new tour van for the Bob Hope this week. Despite a recent cut of some tour representatives the van will allow the company to better address the needs of their growing stable of tour players. They added 17 full staff players this year alone.

TaylorMade also released full details of their R9 family of clubs today. Although the company does not have a display at the PGA Show, I will be attending an invitation only event at a nearby Orlando hotel to get a closer look. Their top product development people, including Benoit Vincent will be on hand.

Back to the topic of the PGA Show in a moment – just a couple of equipment items to take care of:

– Chad Campbell and Long Dive Champion Jamie Sadlowski are now on staff for Adams Golf
– Ricky Barnes and Brad Adamonis have signed with Wilson Golf
– Tiger Shark Golf has acquired SuperStroke Grips, who make extra large grips
– 17 year-old Ryo Ishikawa has accepted an invite to the Arnold Palmer Invitational
– Yes! Golf will show the Tracy III Plus and Lizzy Plus putters at the PGA Show

Speaking of which…back to that PGA Show

As I mentioned I will be attending the TaylorMade function at the PGA Show but I also have a few other scheduled items for next week along with what could be a 100 more that simply pop up. Our magazine will be developing stories for the entire year at this show. A partial list of the scheduled events:

– A full day with the team from Nike Canada testing their latest Victory Red and Dymo products along with just about everything else they have. As a special bonus we will get to chat a bit with Nike Golf President Cindy Davis (one of the sharpest people in the business).

– A drop in at the ACCRA Golf day for their friends at the Windermere Country Club. Watch this blog before the show for a world exclusive on their new shaft line-up.

– The all-important demo day where we get a shot at trying clubs from dozens of manufacturers. I have a Hot Picks feature brewing so this the day that I make most of my final decisions on who is to be included.

– The fun of catching up with industry friends including the guys from www.golfwrx.com The boys will be posting PGA Show pictures all week long so be sure to check in there.

The blog will be fairly quiet in the next week, save for for the big ACCRA story, but if you want to come along with me to the show virtually you can follow my Tweets all week long at www.twitter.com/flagstick