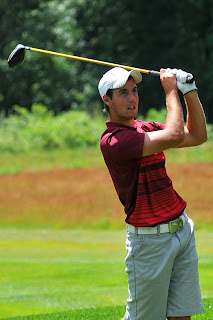 Another work week is drawing to a close so I though I might leave the Blog for the weekend with a few random thoughts and bits of information. My next Blog entry will most likely come from Myrtle Beach, South Carolina. I am off to there on Monday to develop content for a 2010 travel article for Flagstick Golf Magazine.

I’ll play three rounds and I am also testing the new Titleist Forged MB irons while there so I should have a lot to write about. As always you can catch me on Twitter (twitter.com/flagstick) for many daily updates.

There was a lot of action of the golf equipment front this past week, especially following the Ontario PGA Show.

As you may have seen on this Blog Callaway pretty much revealed their entire 2010 lineup. It’s been getting a lot of buzz especially for their new drivers, the FT-Tour and Diablo Edge. They have a very traditonal shape.

On another driver front expect to see a TaylorMade 460 driver soon with 3 (as opposed to 1) adjustable weight. I have seen photos and talked with a friend who has hit it and it looks like it could be a winner. Expect official word from them shortly – they are still busy quarrelling with the USGA over the new interchangeable face wedges and what they can and cannot sell for face inserts. Hopefully that issue is resolved soon.

Paul Casey put the new Nike VR driver into play in China at the HSBC Championship. He’s using the Str-8 Fit model and wanted to hide the silver adapter a bit so he coloured it black with a Sharpie! Nike Golf also sold out their limited run of 100 Method putters this week in 2 hours and 47 minutes. 10 were sold in canada exclusively through GolfTown.

On a more regional, non-equipment, front there should be some news of local junior golfers offically signing to NCAA schools next week as the early signing period starts on Wednesday. For starters Kyle Benford (above) of Kingston will join his clubmate from Cataraqui, Simon Reyers, on the Detroit Mercy squad next Fall. He had revealed his verbal committment to his local paper a week or so ago but expect a formal signing next week. Benford is off to Spain in a week or so to caddie for Kingston-based pro Matt McQuillan at the 2nd stage of European Tour Qualifying.

Catch you all from South Carolina next week.